CineKat Filmworks is a Los Angeles based production company founded by Steven Helgoth and Frayne Rosanoff that specializes in original content for feature films and streaming platforms. We develop content from start to finish, creating interesting concepts into final, completed products for distribution. Recent titles from CineKat Filmworks include the award-winning feature film Hesperia (now available on Amazon Prime, Tubi, Google Play, and YouTubeTV) and the award-winning short film Not a Match featuring original music by Jacob Bunton. Coming soon from Cinekat… the feature films Alien Vacation and Say Goodbye to Hollywood, as well as The Daughters, deSADE, EVIL, and more… !!

Frayne landed in New York City after finishing school in Pittsburgh. An accomplished actor in his own right, Frayne has appeared on stage and screen, from off-Broadway roles in plays such as True West, When U Coming Back Red Rider?, and Brilliant Traces to daytime soaps and feature films. Frayne has produced numerous stage productions throughout NYC and LA, and currently owns the Underground Theater in LA with business partner Steven Helgoth. His production credits have taken him to shoots all over the U.S., from Red Rock to South Carolina to Key Largo and include the feature films Hesperia, Game of Truth, and the short films Not a Match and Let’s Shoot This. Frayne is currently in pre-production on his third feature film Alien Vacation.

Steven began his career in show business as an actor, studying with legendary actress/ teachers Uta Hagen, Geraldine Page, and Sandy Dennis. As the artistic director for several NYC theater companies including The Sanford Meisner Theater and The Vortex Theater Company, Steven has directed over 150 NY off-Broadway plays. Steven then formed Helgoth and Associates Casting in 1998 and quickly went to work casting several projects. West Bank Story premiered at the 2005 Sundance Film Festival and was screened at numerous additional film festivals across the world, garnering several awards, culminating with the ultimate prize- the Oscar for Best Live Action Short Film at the 79th Academy Awards in 2007. Since forming CineKat Filmworks with Frayne Rosanoff, he has branched into what he’s most passionate about- film directing. His recent credits include the award-winning feature films Hesperia, the up-coming Say Goodbye to Hollywood, Game of Truth, and the short films Not a Match and Lets Shoot This. Steve is also the creative mind and writer of Portals, EVIL, deSADE, and The Daughters. 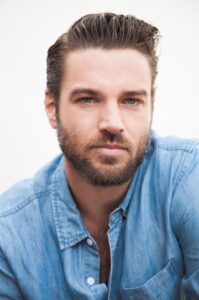 Michael began his journey from Metro Detroit by way of Michigan State University with a specialization in Digital Media, Arts and Technology. After working as a sports reporter at an ABC affiliate in Mid- Michigan, he then moved on to Chicago where he gained numerous acting such as NBC’s The Playboy Club and MTV’s Underemployed. Since moving to Los Angeles to follow his dream of filmmaking, Michael has studied character development and scene study at the Underground Theater in Hollywood, where he met Steven Helgoth and Frayne Rosanoff and booked roles on ABC’s Wicked City,  the feature film Blood Pageant., and the up-coming Netflix original On the Verge.  After first coming onboard to assistant direct CineKat’s feature film Hesperia, Michael has since been involved with all aspects of production within the company, from storyboarding and concept art to writing and cinematography.